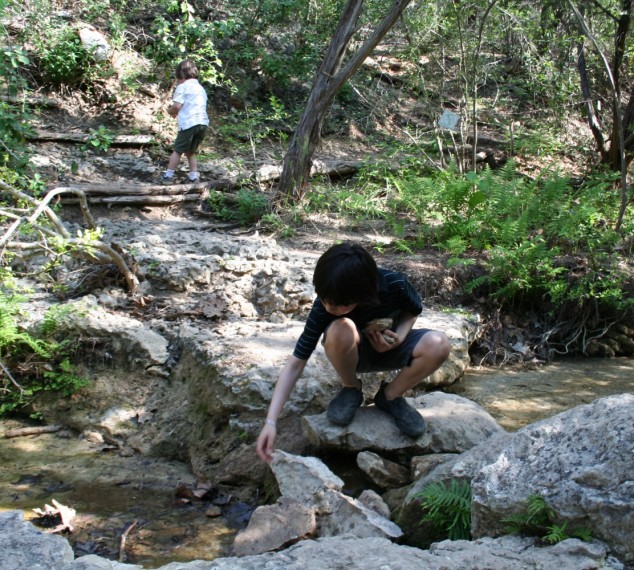 This post also ran on KiDOinfo: Connecting Families, RI and Beyond on August 26, 2015

The other day, I realized that if things had played out differently, I would be gearing up to send Boy 2 to kindergarten.

My boys are 9 and 5, and this will be our second year homeschooling. Last year, my little one was in a beautiful little co-op preschool, and I got my bearings homeschooling Boy 1. We had our tough days, but we love this way of learning and this lifestyle for our family. So both boys will be home this year.

We may or may not be in it for the long haul–it’s a year-by-year decision. A few times this summer, I thought about the coming year and questioned my sanity, mostly from the standpoint of having very little time to myself—I’m either at work or with my kids, for the most part. But that is the life of most mothers, in varying proportions. This year, I will make sure I have an afternoon or evening every week with childcare when I’m not working so I can put down my roles and responsibilities and have a little time to just be Camille—not the mom, the homeschool teacher, the wife, or the midwife. I am ready now to build that in to my family’s schedule without guilt, knowing that it is a necessity, not a luxury.

Once I talked myself down off the ledge of general overwhelm, I had myself a minor freak-out about how I would actually direct the education of two kids four grades apart. Last year, I had the luxury of quiet one-on-one time with Boy 1 while Boy 2 was in preschool three mornings a week. This year will bring a new period of adjustment. How will I create space for quiet focus for my 9 year old with my active 5-year-old running around all the time? How will I provide my kindergartener an enriching experience while doing “real work” with my 9 year old? How will I select enough but not too many outside classes and social activities for both boys without us running around all the time like a carload of chickens with our heads cut off?

I feel much better now. How did I get through these moments of panic and angst? I sought support from veteran homeschool moms who have been there and done that. I reminded myself that plenty of people are doing this very successfully with three and four kids or more.   I nailed down the last of my curriculum decisions, which helped me envision what our “sit down work” mornings will look like. I remembered how much I worried last year about doing enough, only to be amazed by the end of the year at what we were able to accomplish. I made the shift back to focusing on the gifts of the homeschooling lifestyle—mainly more time together, freedom and choice. Our school year is ours to create.

And then there’s the gift that underlies it all for me—the gift of following my heart and my gut as a mother instead of operating out of fear and “shoulds.”

I have no real regrets about Boy 1’s three years in traditional school. By and large, he had a good experience. I don’t second-guess my decision to homeschool and wonder “what if?” the way I know I would if neither of my kids had ever been to brick-and-mortar school. But naturally, with all the talk of “back-to-school” and Boy 2 being kindergarten age, I’m thinking back to when Boy 1 started kindergarten.

He was a young 5—barely made the age cut-off to start K, and we agonized over whether to send him or wait a year like many people are doing, especially with boys. We decided to grab the elusive spot at this particular school while we could, since everyone was telling us he was ready. Once we made that tough decision, we weren’t too worried about his adjustment to kindergarten. He had been in daycare three days a week from age two to four for 10-hour days. During his pre-K year, he was in preschool three days a week. Add to that the fact that he has an outgoing, adventurous personality, and we thought he would make a seamless transition.

Instead, he cried almost every morning for three or four weeks. When I asked him why he didn’t want to go, all he could come up with was “I just need time to do my Legos, mom.” His teacher was a 30-year veteran who was calm, kind, and reassuring. A couple of times, she left her classroom at the start of class to come out to the car and help me coax him in. She stayed in regular communication with me and kept saying some version of, “I know you’re worried, but trust me, within a month he’ll be absolutely fine.” And he was.

But before he made the transition to going in happily each morning, I thought we had made a terrible mistake, that he hadn’t been ready after all and we should have waited a year. If his teacher hadn’t been such a pro and so sure of what she was telling us, we might have pulled him and sent him the following year. We seriously considered that, but it seemed so radical in the face of the reassurance and encouragement we were receiving.

Homeschooling crossed my mind a few times. But back then, it was a cool idea for OTHER people, and not anything that I could pull off. I had a toddler and was trying to recover from a bout of depression, and it just did not feel like an option that was open to me.

So we kept him in school. I quieted my heart and my gut and stayed up in my head. I told myself every day that he would adjust and it would all be fine. And he did, and it was.

Fast-forward four years. If things had played out differently, my baby would be going to kindergarten this coming Monday. I would be having all the emotions that go along with that, telling myself it would all be OK.

Which it would be.

Instead, my baby is “going” to kindergarten at home.   Homeschooling is not the “better” choice, but it is the right choice for our family, for this year. How do I really know that? Because it’s not anything I need to convince myself to feel OK about. It feels right.

Today, I am able to make decisions for my family from that place, and for that, I am grateful.