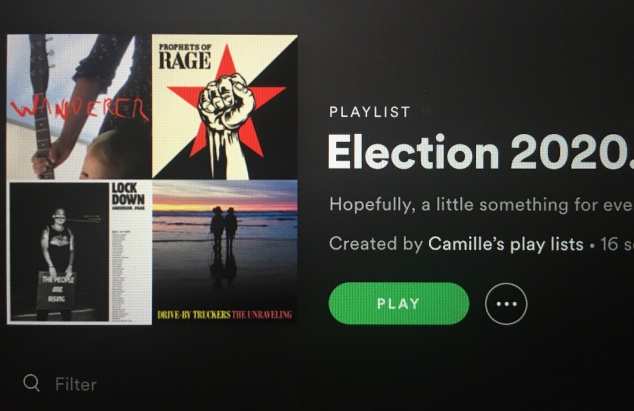 Photo of Spotify playlist. Playlist link is at the end of this post.

Nothing says life in the Trump/McConnell era like going about your daily business in a simmering, nail-spitting rage, while also functioning more or less as if it’s a “normal” day. It’s quite the split. Quite the disconnect. (How will this alone, as a chronic state, fracture our souls? )

Is it at least as bad as we thought it would be, when we were tossing and turning in the wee hours of November 9 in 2016, waking up a hundred times from a half-sleep, knowing something was horribly wrong, then remembering what it was? Is it worse than we thought it could get?  I don’t think most of us imagined COVID. Except, of course, for the epidemiology experts who predicted it almost exactly, and briefed the Trump administration on the necessary preparations, as they cut the funding and programs to do so.

We were worried about RBG, but did we imagine the way they would do it— with her, 8 days before the election? That it would be so…poetic in its staggering hypocrisy and shameless evil?

We were very worried about the hell he promised to make for immigrants seeking asylum (fleeing from horrific conditions we helped create). But did we really imagine 500+ children kept in cages, their parents lost to them, them lost to their parents? Stolen, I mean. Not lost.

Did we imagine that Trump’s foot soldiers (read: jack-booted thugs) would be plucking protestors off the streets, without cause or even identification? Or that his most staunch supporters would set police stations on fire and incite violence at protests in order to pin their violent acts on Black Lives Matter activists? I think many of us did imagine things like this, actually.

But did we imagine a frightening and exponentially increasing number of “normal” people falling (diving?) down the QAnon rabbit hole, actually believing Trump is the savior from blood-drinking pedophile devil-worshippers taking over the world? (Did I really just type that? Or is this a dream?) No. I’m pretty sure no one imagined that—at least not the amount of traction it would gain or its potential to stoke white supremacist domestic terrorism, even after Pizzagate. Or how it would attract mommy bloggers and Instagram influencers, and dovetail with traditionally left-leaning New Age spirituality and holistic wellness communities (phenomena known as “Pastel QAnon”).

These are just a few of the horrors, and I could go on at length, of course. Who knows if it’s as bad, or not quite as bad, or worse than we knew it could be. It’s in the ballpark, that’s for sure.

The week after the election, I wrote about the way my younger son–six years old at the time, sat on the stairs the morning of November 9, 2016 and said, “It’s hard. It’s hard to admit that Trump is the president.” It still is. Back then, as I did my best to console my stunned, crying firstborn, I vowed that in 2020, I would take him to a swing state so we could knock on doors together. He would be 14 and the perfect age for that, I thought. He is, but the pandemic nixed that plan along with all the others. So, we settle for phone banking.

Anyway. Like it’s been my whole life, music is mental health. I used to want to be a DJ when I was a kid. I have no idea what happened to that little-girl’s-dream. This wretched, terrifying, dare-we-be-hopeful week seems as good a time as any to revive it.

So here’s what will likely be the first of many playlists I want to share. Hopefully, it has a little something for everyone (everyone who wants him OUT, anyway). I’m sending it out with prayers for us all, and most of all our children, who will have to live with the consequences of whatever happens next. Here’s hoping this is rock bottom and humanity will soon be on our way out and up.

May the last song turn out to be true.