As some of you know, I’m in the process of a massive decluttering project using the KonMari Method from the book, The Life-Changing Magic of Tidying Up by Marie Kondo. The author recommends purging by category rather than area or room. Per the suggested order, I did clothes first, and after a long break during which life happened, this week I finally moved on to books.

Before I read the chapter on books, I was dreading this category, having always found it near impossible to part with books.   I did one purge already last winter, but only got rid of a couple boxes. After reading Kondo’s chapter on books, I felt excitement rather than dread because she gave me new ways to think about it that made sense to me.

In a nutshell, her advice is to have a very small book collection and only keep books that you currently use or absolutely, positively love. She insists that you take them all off the shelves and put them on the floor in one place, devote time without distraction, pick up each one in your hands (without starting to read it—I cheated a little on that part), and decide intuitively which ones to keep based on whether or not they “spark joy.”

The shelf in the first picture above contains everything that is left except the children’s books, my husband’s work stuff, a couple of my old textbooks, and my small bedside stack. Although I think we still have more books here than we need, about two thirds of them are gone, and we are now another step closer to a simpler, more spacious life with less stuff. And there IS magic in the process, as promised! So here’s how we made out.

What we started with, piled up on the basement floor:

These I found relatively easy to deal with. I know which ones are “hall of famers,” and the rest were pretty easy to let go of.   Exceptions to that are self-help/spiritual growth and parenting books. I got rid of some, but still kept too many. I will give that genre another go round in a couple months.

Books I really want to read (or so I thought), but haven’t.

These were the hardest to part with.   I found Kondo’s advice the most helpful regarding these books. “Someday means never” is mostly true, I think. I had to go against major resistance to put so many of them on the discard pile because I just know I would love them, and yet they have been sitting on the shelf unloved for 5, 10, 15, even 20 years. Kondo says, “It will be far better to read a book that really grabs you right now than one that you left to gather dust for years,” and “The moment you encounter a particular book is the right time to read it.” This resonates. The single piece of advice from Kondo that made it easier to part with the books I always thought I wanted to read but never did? Out of all these huge stacks, if I find there are a handful I regret parting with, I can easily replace those few and actually read and appreciate them this time.

Kondo makes no mention of kids’ books, and I did those separately (and not quite as ruthlessly), and their books are not part of the stacks in the picture. We also kept the kids in mind when doing the adult book purge. We saved a couple dozen classics that would have otherwise gone to the chopping block (mostly unread!).   We figure the boys may discover and read more of them over the years if they find them here in a small home collection.

At the beginning of this book purge, I said to Gurpreet, “OK. Are you ready to be half-assed, moderate, or ruthless?” “Ruthless!” he said. As it turned out, he was completely on board with non work related books, of which he had relatively few to begin with.  However, his technical, math, and engineering books were a different story.  He was able to part with four out of a couple hundred. He asks, “How do you get rid of books that are tied to how you make your living?” I reminded him that he has only opened a handful of them since grad school 18 years ago. He was not impressed with that argument. No problem—he has his own shelves in his (very cluttered) work area. That’s his deal. I let go of all but the critical few of my midwifery school textbooks, and I lead by example!

I now agree with Kondo that having a small collection increases the impact of the books you do have. During this process, I mostly discovered books I no longer want or need, but I also discovered these hidden gems that had been lost in the stacks of irrelevant titles:

This book by Wayne Dyer is rocking my world right now. I picked it up a couple years ago and read a few pages, but at the time I found it a bit too “out there” and put it down. Apparently, I’m “out there” enough now to be ready for it. Who knows when or if I would have noticed it again if not for this purge? 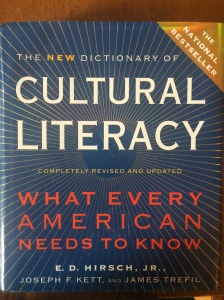 My husband picked up this book when he was thinking about joining the Foreign Service and studying for the exam. I flipped through it and it’s full of interesting and fun stuff.   But the first thing I noticed was the chapter on idioms—it lists every one you’ve ever heard, and a lot you haven’t, and what they mean. This is perfect timing, because my eight year old just learned about different types of figurative language in our last homeschool language arts unit. So this book is out of the basement and ready to be explored with him at the perfect time.

Neither my husband nor I can remember ever opening this book of illustrations. I flipped through it and found two images I absolutely love. I tore them out and got rid of the rest of the book.

During this process, I thought a lot about why it’s always been so difficult for me to let go of books. There is the simple fact that I love books. Love of reading aside, I think bookshelves full of books are beautiful and a solid decorating strategy. And books are memories—echoes from your life as it was when you read them.   Then there’s the big one I’ve already mentioned—“I just know I would love this book that I never seem to pick up for whatever unknown reason.” Others represent hopes I had for things I wanted to learn more about or start doing, but never did (horseback riding, Ayurvedic medicine, flipping real estate). Letting the books go means letting the dreams go and accepting that I am likely never going to pursue those things after all.   That is actually OK, but you have to go through the process of deciding that, and the tendency (mine, at least) is to avoid that by letting the books continue to gather dust.

In one case, I didn’t completely give up a potential interest, but getting rid of the related book means if I do pursue it at some point, I’ll be doing so in a more meaningful way. The Medicinal Herbal reference book has been sitting unloved for two decades. I opened it, and the layout feels overwhelming and disorganized to me. I have “always wanted” (?) to learn more about herbal remedies—especially as a midwife, I feel I should be better versed in this and it was a very minimal part of my training (mostly in terms of what to avoid).   But at this point, I have enough friends and colleagues who are knowledgeable in this area. If I need some information for a patient or myself, I can just make a phone call and most likely get more meaningful information than anything I could get from this book. And if I decide at some point to devote time to educate myself, I’ll do that by joining a class in my community with Farmacy Herbs, an organization about whom I’ve heard rave reviews.   So getting rid of this book means if I do need related information in the future, I’ll be more likely to find it by connecting with my community.

Finally, I made one unwelcome but ultimately worthwhile discovery, so I’ll let you in on this minor but nasty little secret. Part of the reason for holding onto all these books for so many years is because having them (even if half of them have been in the basement for 3 years) represents evidence of intelligence and depth. There, I said it.

Needless to say, I was less than thrilled to find this dark little corner of pride and insecurity, but I am grateful. After all, it was there whether or not I chose to go looking for it. Bringing it out for viewing in broad daylight means it wasn’t driving me during this project. I believe I was able to part with A LOT more books I don’t need anymore, knowing that this was one of the reasons I’ve been holding on to so many—a reason that doesn’t reflect the way I want to be and live. What I want is to be completely at ease with who I am, which means having nothing to prove ever, not even to myself.

So it’s true that getting rid of extra stuff isn’t just about the stuff. You will find some clarity about what you’re truly interested in—not just those things that seem like sensible or intriguing ideas, but those things that compel you to devote time and energy to explore. And besides all the material items you never use or forgot you had, you just might unearth some unexpected, unseen ghosts, too. You might go “Ew” and want to banish them back to where they came from at first, but I found out it’s better to be friendly and get know them a little. Then you can reclaim their power and use it to move you toward what you really want.  (And then lovingly release them!)

7 thoughts on “Lessons From Books (Not the kind you think…)”