“If you take care of the small things, the big things will take care of themselves. You can gain more control over your life by paying closer attention to the little things.” –Emily Dickinson

We went on a family vacation a couple months ago and I was thinking about why it’s so freeing to be on vacation. I only work part-time and I love my job, so it’s not about not being at work. And it’s not like you’re relieved of all your normal responsibilities when you’re traveling with kids. A lot of the moment-to-moment stuff we do is the same no matter where we are—keeping everyone clothed, fed and out of the ER. There are the obvious reasons why vacation is awesome–the excitement and fun of exploring new places, spending time with old friends, and all four of us being together for a whole week. But there seemed to be even more to it than all that, and then it dawned on me. There is no stuff management when you’re on vacation. The usual background running list of “things I need to get to” is suspended.

Years ago, I was a travel nurse, going from one 3-6 month assignment to another all over the country. I had a few things stored in my friend’s basement, but other than that, everything I owned fit in my little Subaru hatchback. I lived very well with only that much stuff for two years, staying in apartments furnished with the bare minimum from Rent-a-Center. How did I get from there to mystery boxes in the basement, spilling closets, and shelves full of miscellaneous items that spontaneously reproduce in the night? I have no idea, because I’m not even a shopper, and we are relatively minimalist when it comes to toys. Stuff seems to spawn into more stuff somehow.

My husband is on board 100% in spirit, but not whatsoever in body or mind. Every time I have said, “Honey, let’s do it! Lets get rid of all this crap!”   He says, “Yes! It’s weighing us down! Cluttering our minds! Holding us back from our goals! I’m a believer! Let’s do it!” Then I start holding up items for the chopping block, and he says, “No, we have to keep that because fill in the blank.” And yesterday, when I read him the introduction from the new book I just got about decluttering, he said,

“I think you already read this to me.”

He says, “You can read it to me, so long as you don’t touch my stuff.”

So I told him, sorry honey, I love you, and you’re the greatest, but as my decluttering partner, you’re so fired. I’m gearing up for the most ruthless purge ever. I won’t touch your stuff, but as for household items of all types, you better claim it now, or nail it down–otherwise it’s fair game.

Here’s the garage. In our defense, about half the time we can actually drive a car into this garage, and some of what’s in this pic is stuff we are storing temporarily for my brother-in-law.   But most of that crap is ours.

The storage area in the basement. If we had a house fire (knocking wood now), we would not even remember we had 90% of this crap (you hear that, G?). 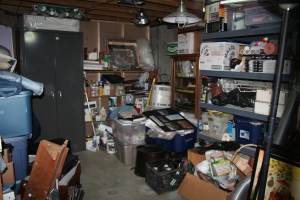 AND, there are glimmers of our future clutter-free life.   There are several surfaces that we manage to keep clear most of the time: 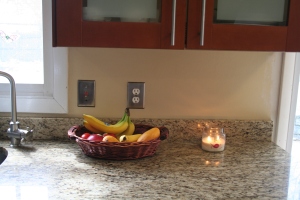 We don’t have anything close to a reality TV type situation over here, but still. I want to look around and see a few things we really love surrounded by lots of clear, open space, everywhere in the house (OK, I’ll settle for almost everywhere). I want our home to be a true sanctuary, not a source of overwhelm. I want more energy freed up for the things my family and I really want to be doing. Even when no time or physical energy is being expended dealing with stuff, I’m hemorrhaging mental energy just by having my perpetual mile-long list of “things I really need to get to in this house.” Without all this stuff, what would there be to “get to?” Just basic cleaning, laundry, cooking. That’s plenty.

I try to hold the mindset of enjoying regular everyday homemaking tasks as meditative activities (multitasking even when practicing mindfulness, haha). I achieve highly variable degrees of success at that mindset! Theoretically, that can be done under any conditions, but I know it would be easier if the everyday basics were the only tasks at hand. I have this vision of mindfully, peacefully folding and putting away one load of laundry, putting just a couple things away in drawers that contain only a few essentials, wiping down empty, pile free surfaces… then on to more living! No stuff management, and equally important, no thinking about stuff management. That’s what I want, and I’m ready to work for it! Seriously. I’m ready to get up an hour earlier for it.

This problem is about as First World as it gets, I realize. But I know I’m not alone in feeling weighed down by STUFF, since friends are talking about it, too, and there are books and minimalist blogs and organizers-for-hire and online decluttering challenges. But where to begin? I keep threatening to rent a dumpster for the driveway and pretend we are moving cross-country and have to pay by the ounce for everything we want to bring with us.

I was already determined to just begin somewhere and tackle this and actually complete it. Then, at the perfect time, I heard about this book, The Life-Changing Magic of Tidying Up:  The Japanese Art of Decluttering and Organizing, which arrived in the mail yesterday. Some of the negative reviews are hilarious (“Do you like talking to furniture? Do you believe shirts have souls? Are you insane? This might be the book for you.”), but the good ones resonate, and it came highly recommended by some fabulous domestic goddesses. This KonMari Method involves doing a massive purge over about a 6-month period, doing it by category instead of by area, and keeping only those things that “spark joy.” The promised end result? Everything is in order, you’re surrounded only by things you love, and your environment, habits, and most importantly your mindset are so radically changed by this process that you won’t ever revert back to your clutterbug ways. Sold!

So, I bought my ticket for the decluttering bandwagon a while ago, and now I’m finally jumping on. Springtime new moon is the perfect starting point. I have the better part of two days set aside for the coming week, and I plan to get enough done to create some momentum and hence the motivation to find time to kill the rest. At the very least, I’m going to do a half hour every single day no matter what, no excuses, and big chunks of time whenever humanly possible until it’s DONE.   I am accountable here, and there will be updates. Who wants to join me?

13 thoughts on “Killing the Clutter Beast. Because in my house, it cannot be tamed.”